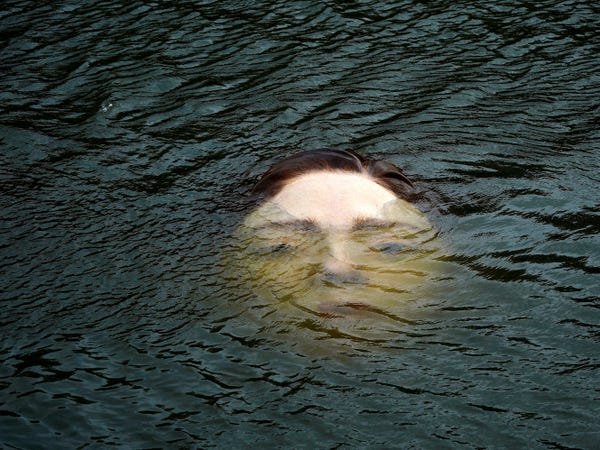 On the north coast of Spain, residents woke up to a shocking sight last week. A young girl’s head was almost submerged in Bilbao’s Nervion River as the water rose, covering her mouth, nose and eyes.

The fiberglass sculpture is the work of Mexican hyperrealistic artist Ruben Orozco Loza. It is called “Bihar”, which means “tomorrow” in Basque, the language spoken in the region.

“At first it gave me a sense of stress when more of the face was out of the water, but now to me she communicates grief, a lot of grief,” Triana Gil, a visitor looking at the sculpture, told Reuters on Tuesday. “She does not even look worried, it’s like she’s drowning.”

Loza does not explicitly say that “Bihar” refers to climate change – in an email to Insider, he described the play as a reflection on the decisions we make for future generations more broadly. But it’s hard not to connect. The latest report from the UN Intergovernmental Panel on Climate Change showed that from 1901 to 2018, the world’s oceans rose by half a foot on average, and the annual rise in sea level has almost tripled.

“Bihar: Choosing Tomorrow” is an exercise in taking a break, looking at what is changing and, above all, a future reflection of what could happen if we continue to focus on unsustainable models, “Loza told Insider in Spanish.

“I hope this piece helps people reflect and see how we, like the sculpture, can get to a point where we are no longer fluid,” he added.

The piece was and quietly installed in the river at dawn, without notice. It was commissioned by the BBK Foundation, a philanthropic arm of Kutxabank, a bank in Bilbao.

It took Loza three months to complete the artwork he designed and made in Mexico with the help of his wife. He then flew it to Bilbao in eight parts, where it was later assembled and brought to the river by boat. A steel structure keeps the girl of 3.5 tons submerged, Loza explained.

Just days before the sculpture appeared, a paper published in the journal Science reported that babies born in 2020 will experience two to seven times more extreme climate events – such as heat waves, fires, crop failures, droughts, floods and tropical storms – than anyone born in 1960.

“Our findings highlight a serious threat to the safety of young generations and call for drastic emission reductions to secure their future,” the authors wrote.

Limiting global warming to 1.5 degrees Celsius would reduce the burden of extreme weather for younger generations, the authors note. In fact, extreme temperature changes would be twice as marked at 2 degree warming than at 1.5, according to the IPCC report. But we are about to cross the lower threshold in the next 20 years, as the planet has already warmed 1.1 degrees.

So it is not surprising that many young people around the world are worried. In a prescriptive survey among 10,000 people from 10 countries between the ages of 16 and 25, 59% said they felt “very concerned” or “extremely concerned” about climate change.

The survey, published by the journal Nature this month but not yet peer-reviewed, also found that 57% of respondents described climate change as making them feel “powerless”. Another 30% said it made them feel “indifferent”. This is where Loza’s piece can come in.

“Art leaves no one indifferent. That’s its function,” he said.