With vehicle production crippled by the semiconductor chip shortage, sales of new motors remained at almost 20-year lows with just 1.65 million passenger cars entering the market in a ‘desperately disappointing’ 2021 for the motor sector, according to industry bosses.

Annual car sales were a mere one percentage point higher than a lockdown-hit 2020 – in which showrooms were forced to close for months – making it the second worst year for registrations since 1992, the Society of Motor Manufacturers and Traders confirmed this morning.

With manufacturers facing significant part supply issues and forced to make tactical decisions around priority of production and more consumers buying an increasing number of electric and hybrid vehicles, the list of the UK’s best-selling models of 2021 looks drastically different to how it did before the pandemic.

Exact registrations figures for each model will be added to this story when SMMT data is published at 9am. 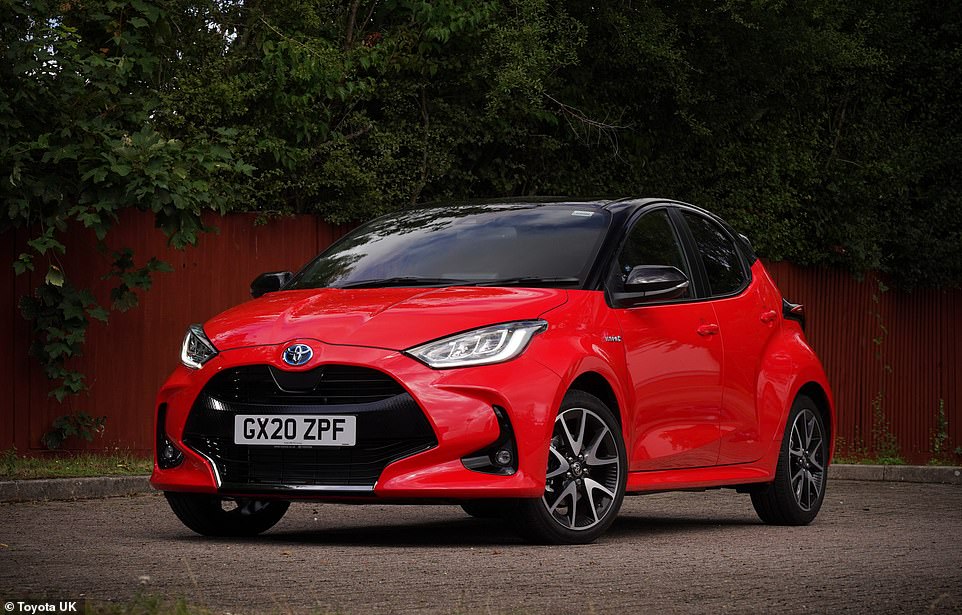 The Yaris picked up a number of awards in 2021. Toyota’s impressive management of the semiconductor chip shortage helped the supermini gatecrash the top 10 best sellers in the UK last year

The all-new Yaris was named 2021 European Car of the Year and picked up a number of different accolades last year, also boosted by the huge popularity of the GR Yaris rally-inspired hot hatch.

Toyota was one of the brands that best managed the semiconductor chip shortage last year, having stockpiled the essential parts. However, in August it was hit by supply issues, with the company forced to suspend production during September. Still, the impressive small car racked up enough sales to scrape into the top 10.

Toyota’s impressive management of the chip shortage also saw it become the best-selling brand in the United States, dethroning General Motors, which had held the crown as US’s favourite brand every year since 1931. 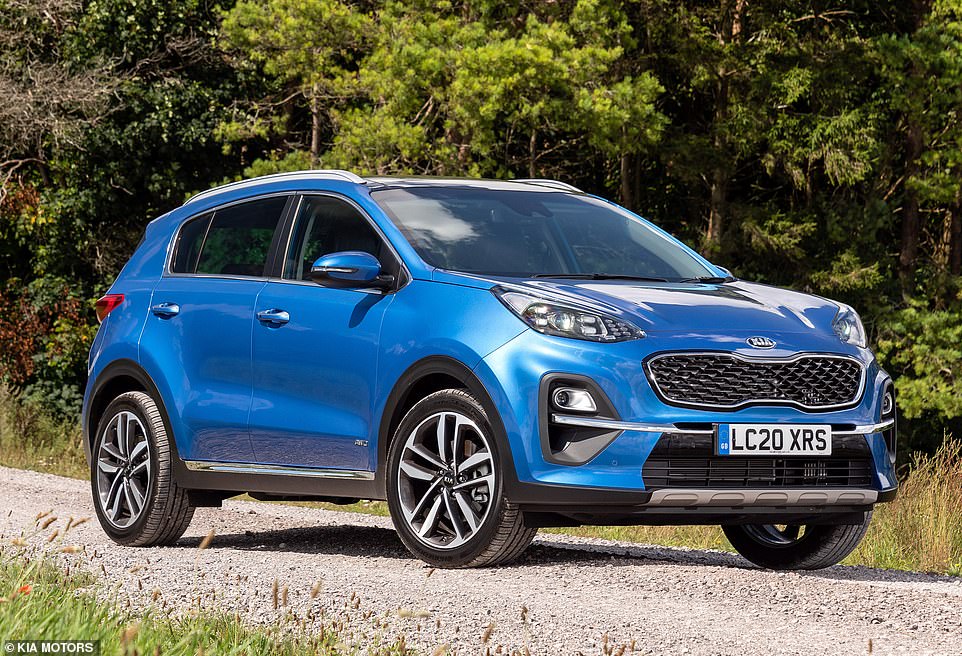 The Sportage has always been a relatively popular family SUV in the UK, taking sixteenth spot overall in 2020. The rise to ninth spot last year is likely due to cars being available to buy.

That’s because an all-new Sportage hits the market in 2022, meaning dealers would have been shifting the remaining stock of previous-generation examples.

Why is it so attractive to buyers in Britain? Firstly, it is competitively priced – and that’s before you take into account any discounts with dealerships looking to make space in their showrooms for the arrival of the 2022 model.

But it is also packed with loads of equipment and is sold with Kia’s long-lasting seven-year warranty. 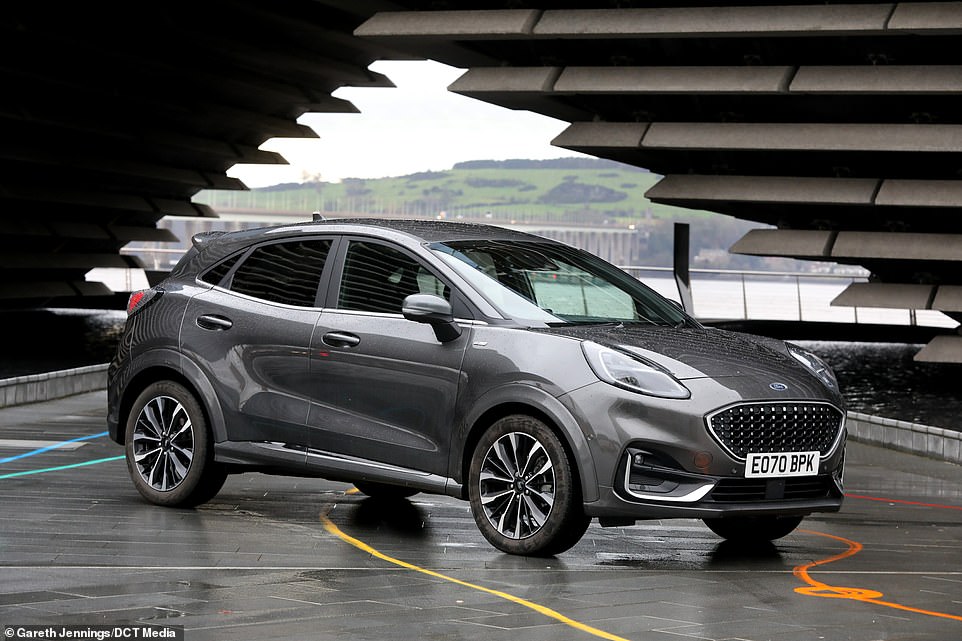 The Puma is – incredibly – the only Ford to make it into the top 10 best-selling new cars of 2021, with the Fiesta and Focus slipping out of the rankings for the first time in decades

Like the Toyota Yaris, the Ford Puma has picked up plenty of awards since it hit the market a couple of year ago, winning a string of gongs in 2020.

Incredibly, it’s the only Ford model in the top 10 list of best-selling cars, with both the Focus and – incredibly – the Fiesta dropping out of the order for the first time in decades.

Insiders suggest the reason for the pair of Ford stalwarts falling down the pecking order of registrations wasn’t a case of dwindling demand but a shift in tactics by the company as it appeared to prioritise semiconductor availability for the production of its commercial vehicles.

The Puma officially becomes the best-selling compact SUV in 2021, retaining the accolade for 2020 by leading the expanding sector. 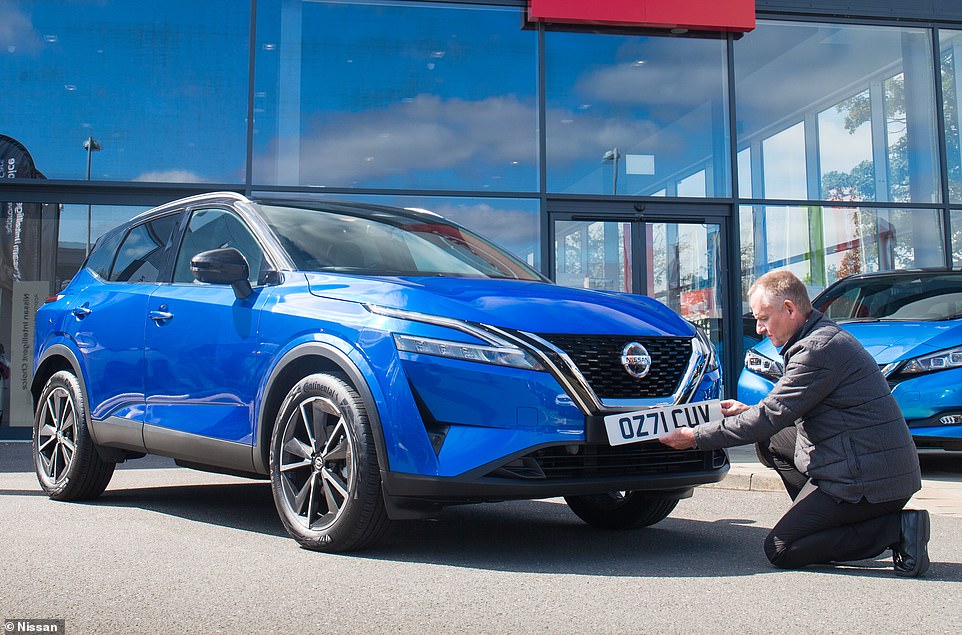 The Qashqai has been the best-selling SUV in Britain since it first hit the market over a decade ago. In 2021, it retained the crown

The Qashqai has retained its crown of Britain’s most popular SUV in 2021, amassing more sales than any of its rivals yet again – a feat it has managed ever since it was first introduced in 2007.

One big factor helping to boost the Qashqai’s popularity among Britons is the fact it is produced on our shores, with the SUV assembled at Nissan’s Sunderland factory. And a new version arrived in 2021 offering mild-hybrid technology, plenty of extra equipment, a boost in practicality and fresh new looks.

A combination of orders for the third-generation car and sales of remaining second-gen model stocks in showrooms has kept it firmly among the best-selling new passenger vehicles of the previous 12 months.

A new ‘e-Power’ hybrid is set to be made available soon, which should help to cement the Qashqai’s position among the most popular motors in 2022 as drivers switch to greener vehicles. 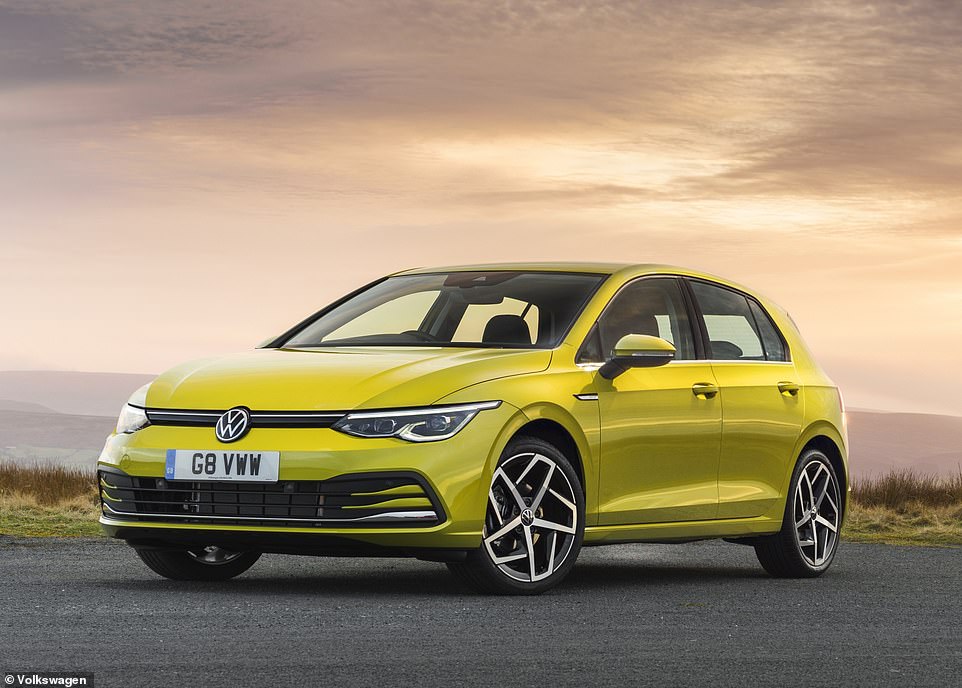 The VW Golf 8 hit the market in 2020, meaning it has been on sale during one of the most difficult recent periods for the automotive sector

Every car maker has suffered as a result of the semiconductor shortage, with automotive giant VW also caught up in the global issue.

As a result, the Golf – traditionally Volkswagen’s best-selling new car – has slipped down the charts to sixth, having been the third most popular model in Britain behind the Vauxhall Corsa and Ford Fiesta in 2020.

Reduced outputs at the brand’s Wolfsburg plant means the German car maker has a backlog of Golf orders to fulfil.

The eighth-generation car hit the market last year, meaning it has arrived at one of the most difficult times for the sector. 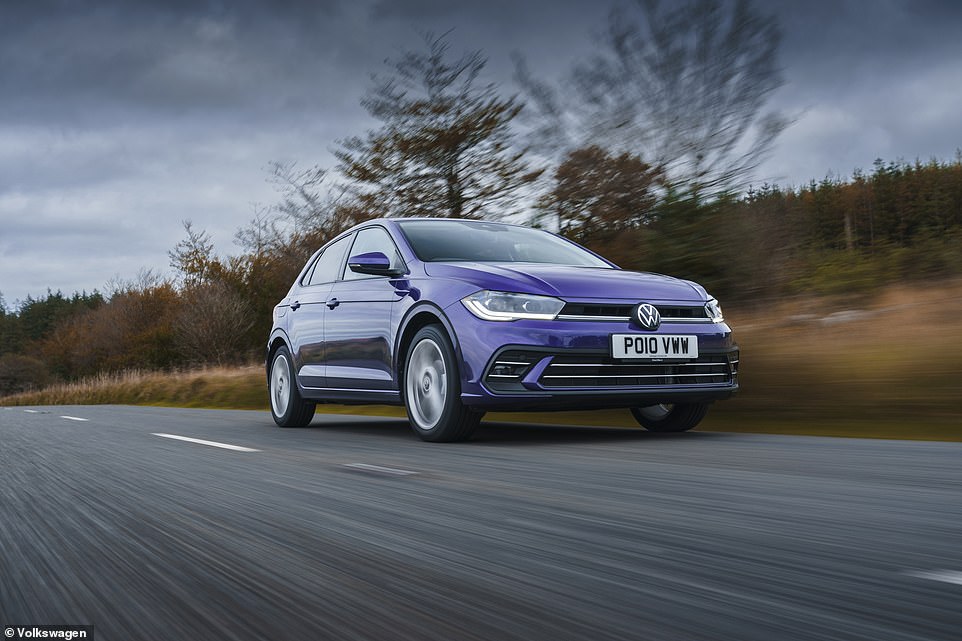 The Polo rose above its bigger VW sibling – the Golf – in the sales charts in 2021, with figures likely bolstered by the sales of remaining stocks of the previous-generation model that has recently been replaced

Like the Golf, there is a new Polo on the market, arriving in the last year.

That means its position of fifth in the 2021 rankings is likely a result of available stock being sold to make way for the latest iteration with order books for the latter opening around September.

This has pushed the Polo above its bigger sibling in the UK sales charts for the first time in years. 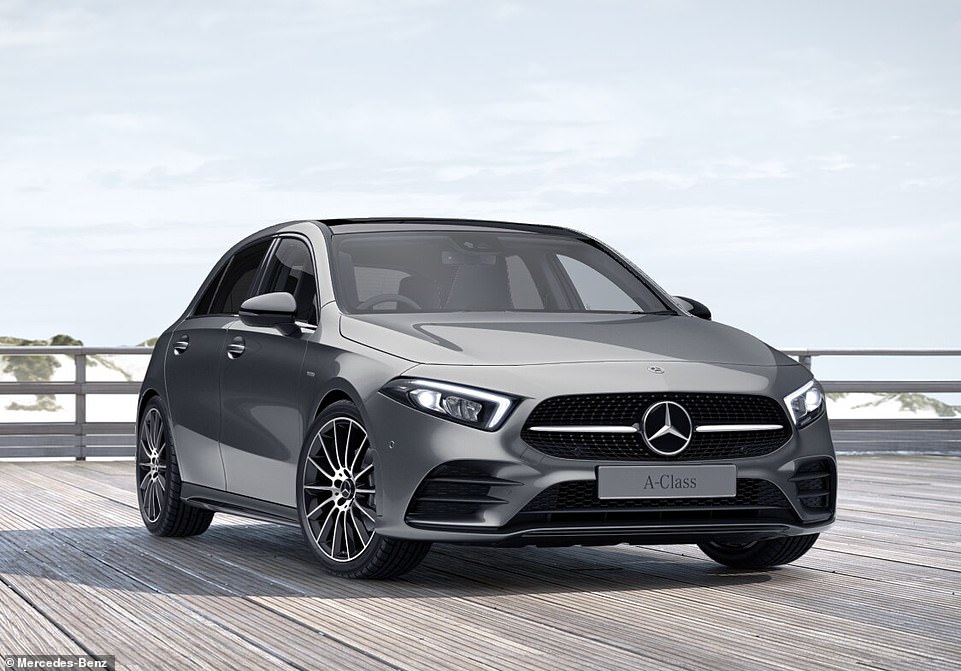 The Mercedes A-Class, which starts from just under £26,000, is now the most popular new family hatchback bought by Britons

The UK has a new favourite family hatchback – and it’s a premium model.

The Mercedes A-Class now outsells the VW Golf, Ford Focus, Vauxhall Astra and every other mainstream family hatch on the market, and has also completely thrashed the BMW 1 Series – arguably its closest rival.

This second-generation A-Class only arrived on the market late in 2017 but has had a big impact on UK buyers.

Private customers and fleet operators have been lapping it up due to its quality interior and high safety standards. This has seen the Merc move one place higher in the sales standings than last year. 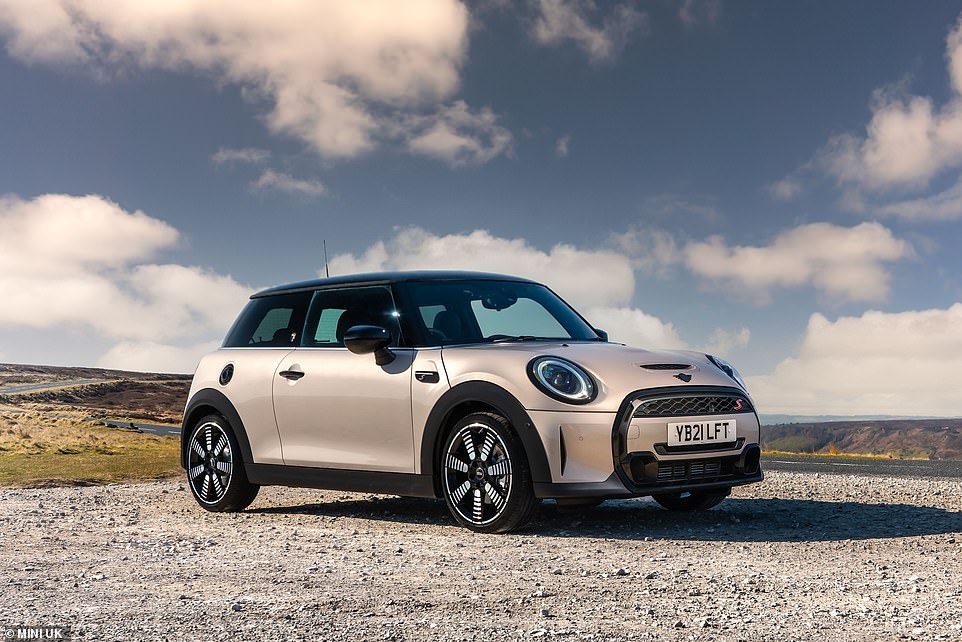 Despite pausing production in April due to the semiconductor shortage, Mini has sold enough hatchbacks to warrant taking third spot in the sales charts for 2021

The Minis rise to the third most-bought new car in 2021 is despite owners BMW being forced to pause assembly lines at its Plant Oxford site in April, again due to semiconductor shortages.

Yet some enough examples of the compact hatchback – both three and five-door models – were registered in the UK for it to secure third spot overall in the sales charts, according to the latest SMMT figures.

This means the Mini has jumped four places higher in the popularity ranks for UK drivers compared to a year ago.

The Mini Electric – also built at the Oxford factory – likely helped to boost sales, with the zero-emission version of the car the seventh best-selling pure-electric vehicle last year. 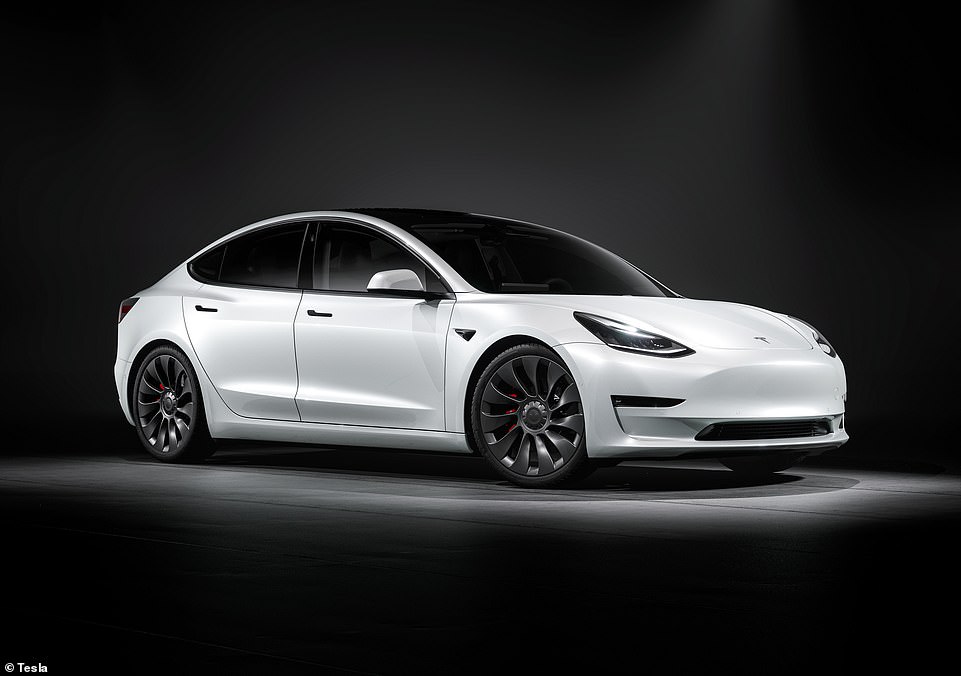 Incredibly, the Tesla Model 3 – despite its £43,000 starting price – was the second most-bought new car in Britain last year, official figures have confirmed

In 2020 the Tesla Model 3 set a new record by becoming the first fully-electric car to break into the top 15 best sellers in Britain.

Last year, it went to dizzying new heights and has become the second most-bought new passenger car in the country.

Incredibly, at the end of November the Model 3 wasn’t even among the top 10.

However, a shipment that arrived in the final month of the year – as tends to be the case with Teslas mostly coming to the UK in bulk at the end of each quarter – saw it leap up the standings. 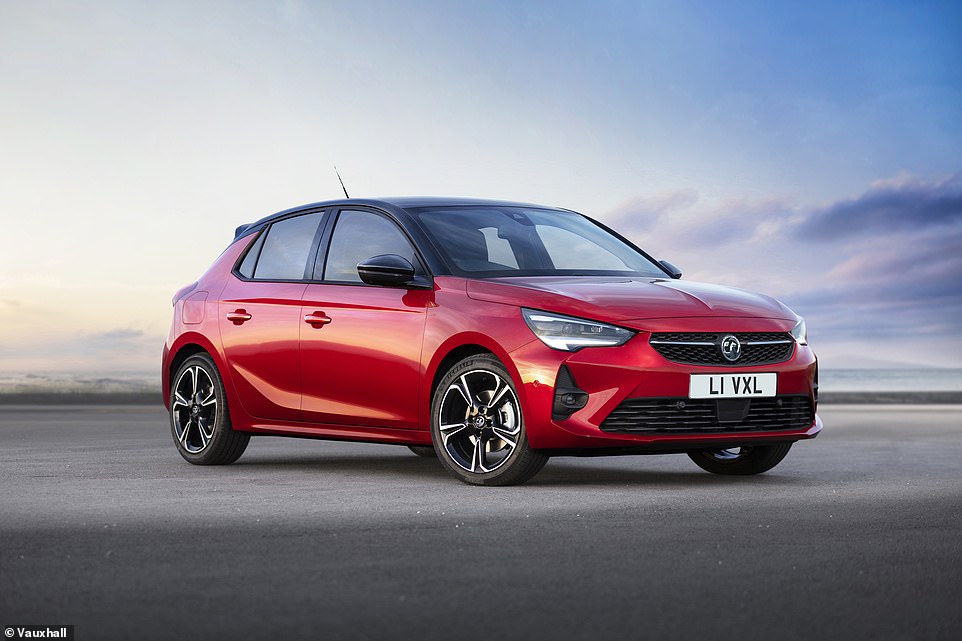 The Vauxhall Corsa has brought to an end the Ford Fiesta’s 12-year stint at the top of the UK’s best-selling cars standings. It is also the first time a Ford hasn’t been the nation’s most-bought new model since 1971

The Ford Fiesta has been the top-selling new car in Britain for the previous 12 years. But it has been forced to pass the baton to a new king, the Corsa.

It will be a bitter pill for Ford to swallow, passing the gong to its nearest rival, and brings to an end a 50 year run of a Ford topping the sales charts.

It also spells the end of a record held by the brand for half a century. The last time a car without the blue oval badge on its bonnet (either the Cortina, Escort, Focus or Fiesta) was crowned the nation’s best seller was in 1971 when the Austin/Morris 1100/1300 topped the registration rankings.

The Corsas rise to the top is down to a combination of factors, including plenty of fleet sales and the popularity of its all-electric Corsa-e, which was the ninth most-bought pure electric car in Britain in 2021.

However, the Corsa WASN’T the best-selling motor in Britain last year… 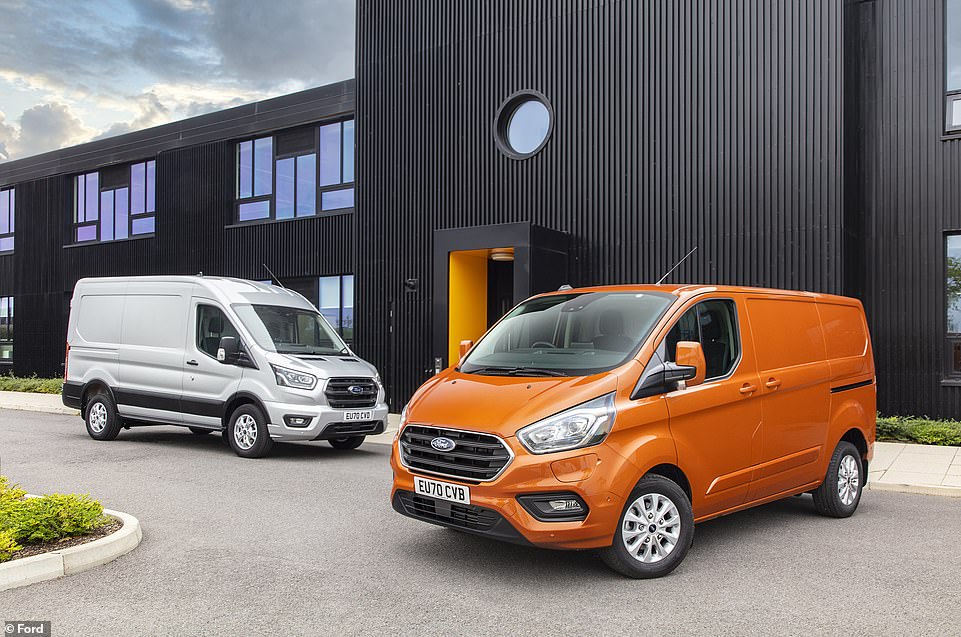 While the Vauxhall Corsa might be the best-selling car of 2021, more new Transit Custom vans (right) were registered in the UK last year

That’s right, the best-selling new motor in the UK last year wasn’t a car but a van.

Industry insiders claim the rise in demand for vans due to the increasing reliance on deliveries during the pandemic saw Ford prioritise its semiconductor availability to its commercial vehicles. For those manufacturers that build them, vans also offer stronger profit margins than passenger cars because they are less expensive to produce.

It also explains why the traditional Transit also sold in massive numbers last year with registrations high enough also to feature in this of list of 10 best-selling cars detailed above.

Some links in this article may be affiliate links. If you click on them we may earn a small commission. That helps us fund This Is Money, and keep it free to use. We do not write articles to promote products. We do not allow any commercial relationship to affect our editorial independence.